During the 2016 US Presidential Elections, I began to write more and more poems in reaction to current events. Before long I realized I had enough poems to make up a chapbook-length collection, and that’s what I thought it would be. But as time went on, I continued to write. I ended up with a collection of 40 poems, which I call exam(i)nation.

People often say politics aren’t personal. But that’s actually not true. What goes on in the political sphere affects me very directly as a queer person, just as it does for women, people of color, immigrants, and all the other groups of people under attack by conservative politics. It can’t be anything but personal when our lives are at stake.

exam(i)nation is both a protest and expression of pride. I hope you will be curious to learn about my experiences.

We couldn’t be more excited about the publication of the debut full-length poetry collection by Dudgrick Bevins. Route 4, Box 358 is a powerful first collection by any standard. Though you got a taste of Dudgrick’s Georgia roots in the Georgia Dusk chapbook, Route 4 delves much deeper into the poet’s past. Here’s a preview of the original photography also included in the book! Be sure to pick up your copy.

These new releases have been a long time coming! Over fifteen years in the making! Finally here, the immeasurable fold: selected poems 2000-2015 is out now! Get a preview of the original drawings from the book above!

As a bonus, obscure mechanics, my first full-length album which I originally released on my website in 2008, has been remastered with bonus tracks and is available wherever you like to get your music (including embedded below)! 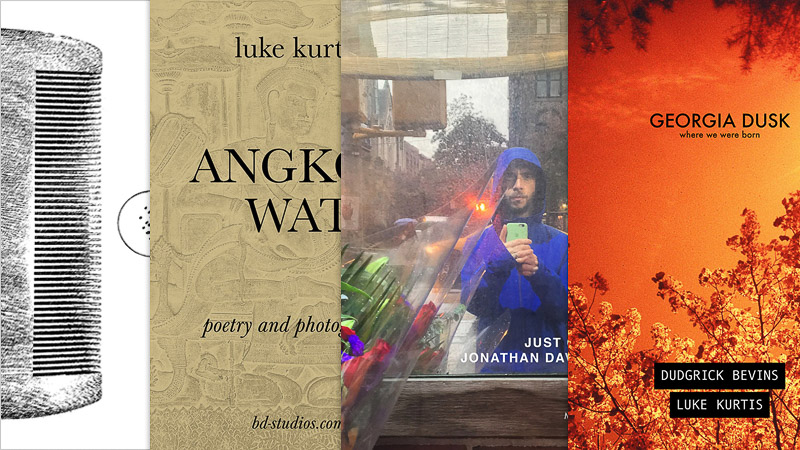 2017 is almost over! We can hardly believe it. It was a busy year for bd-studios.com, and we accomplished a lot. Below are the highlights from our most significant projects!

END_OF_DOCUMENT_TOKEN_TO_BE_REPLACED

I’m writing to tell you about my latest project. Angkor Wat is a poetry/photography book and spoken word album based on my travels in Cambodia. If you follow me online, you may have seen some of my photos from those trips last year as they happened. But that was only the tip of the iceberg. My book is a major project and is what sparked my second pilgrimage to the Far East, which I did by myself in December of 2016. In that sense, this is the biggest project I have ever undertaken. And even though the book and accompanying album are out now—and I hope you will read and listen to them—I am not done.

When I was in Cambodia, I met a monk named Sokhun. Sokhun and I had an immediate connection because he is a poet like me. He’s also into computers and teaches computer skills, as well as English, to several hundred students in a school he founded in the rural area where he grew up. Our common interests of poetry and technology helped things get off to a great start, and I now feel blessed to call him my friend.

END_OF_DOCUMENT_TOKEN_TO_BE_REPLACED

Poetry, publishing, and life two decades in the making

Twenty years ago this month, I published my first book, like an an[...]

We are masked artists and poets in quarantine and solidarity

I reached out to the artists and poets I’ve published to see how everybody[...]

Rodger Kingston and his wife Carolyn are sheltering in place. "We're doing[...]