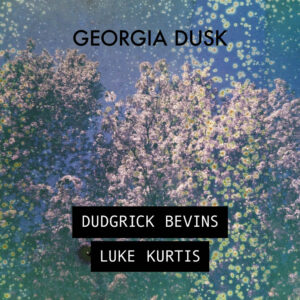 bd-studios.com is pleased to announce Georgia Dusk by Dudgrick Bevins and luke kurtis, a spoken word EP of the original book by the same name. The poems in Georgia Dusk explore each poet’s—both of them Georgia natives—transition from quiet Appalachia to bustling New York City. It will be available to stream and download on 20 Nov 2022.

The Georgia Dusk EP marks the fifth anniversary of the book, which was the artists’ first collaboration. Since then, kurtis has served as editor, designer, and publisher of two poetry books by Bevins, Route 4, Box 358, and Vigil.

“For Dudgrick and myself, sound has always been part of our work,” says kurtis. “It’s one of the things that attracted us as collaborators. How we see, experience, and describe the world unfolds similarly yet is aesthetically varied.”

Like the original chapbook, the EP features two poems by kurtis and one by Bevins. Each poet reads their own texts, while luke kurtis composed music to back the words. “The music, or soundscapes if you prefer, isn’t merely background,” says kurtis. “It extends the text. It’s almost like subliminal thought. A poem can communicate more than what’s in the words. That’s what I tried to capture.”

Instrumental versions of each track are also included, so readers can read aloud from the book for an interactive experience.

Dudgrick Bevins is a queer interdisciplinary artist from North Georgia. His poetry volumes are published by bd-studios.com and Poet’s Haven. He has also released several albums of experimental music.

luke kurtis is an interdisciplinary artist making experimental music, films, and more. His most recent solo release is seaside magic.

bd-studios.com is the art and publishing studio by luke kurtis.