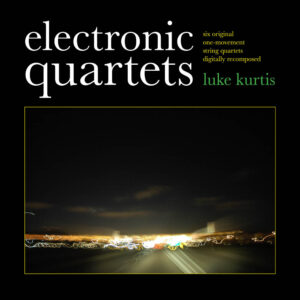 bd-studios.com is excited to announce a surprise new release from luke kurtis! Hot on the heels of the 10th anniversary remastered edition of his debut album obscure mechanics from earlier this year, kurtis continues his effort to release work from his archives. electronic quartets is an album of six original one-movement string quartets digitally recomposed. The pieces were first written for strings over fifteen years ago and were recomposed by the artist in 2014. The new pieces are a unique combination of synth-based experimental electronic music and classical composition techniques.

”At times I wear my influences on my sleeves. You might listen to electronic quartets and, for instance, hear echoes of Philip Glass,” says kurtis. ”But, really, I’ve created something of my own.”

”everlasting,” the first track on the album, was originally written to accompany a poem by the same name which was published in the immeasurable fold: selected poems 2000-2015 earlier this year. The music serves as both an extension of and accompaniment to the abstract poem.

In ”death of the weary soul,” kurtis appropriates a fragment from Berlioz’s Symphonie Fantastique and re-interprets it. ”My music is firmly in the art tradition,” he says. ”Yet when I reference these great figures, I don’t pretend to be anywhere in or even near the same league. I do something totally different. It’s very personal and inward. So when I do call out an influence, I’m not trying to compare myself to anyone else. If anything, it’s a tribute, a thank you’ for inspiring me.”

electronic quartets is available to stream or download at all major music retailers. It is the first of several new albums bd will release collecting the musical output of luke kurtis.

luke kurtis is a Georgia-born interdisciplinary artist. His previous albums include obscure mechanics, Angkor Wat: a spoken word album, and Angkor Wat: an instrumental album. His books include INTERSECTION, The Language of History, Angkor Wat, and Georgia Dusk (with Dudgrick Bevins), all part of an ongoing series that combines photography, writing, and design. He lives and works in New York City’s Greenwich Village.

bd-studios.com is the art and publishing studio by luke kurtis. Our releases include an ongoing line of artists’ books such as Just One More by Jonathan David Smyth, as well as Retrospective by Michael Tice, The Animal Book by Michael Harren, and Here Nor There by Sam Rosenthal.