A NEW COLLECTION OF POETRY & PHOTOGRAPHY

WORDS AND IMAGES COME TOGETHER IN ONE BURST OF PERCEPTION 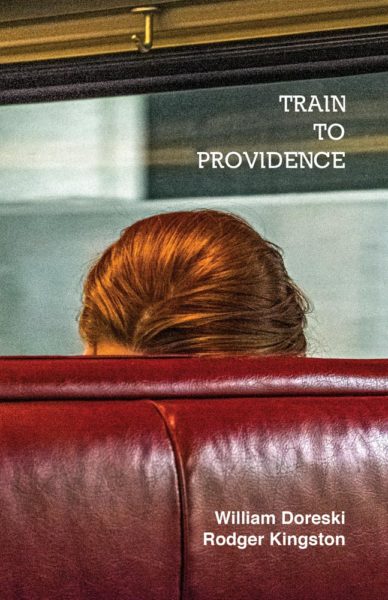 bd-studios.com is excited to announce the latest edition in our line of poetry books. Train to Providence is a collection by poet William Doreski and photographer Rodger Kingston. It will be published in November 2019 in both paperback and eBook editions.

Structured as a conversation between poet and photographer, Train To Providence marks the first book-length collaboration between Doreski and Kingston. ”We’ve been friends for many years, each working on our own creative projects. It was exciting to finally bring our work together in a dialogue,” recalls Doreski. ”Although we were working in different media, we agreed that our work was exploring something in common.”

Kingston’s photographs embrace a documentary aesthetic, but they do not illustrate the poems. The images were created over several decades and represent a selection of the photographer’s work since the early 1970s. He suggested images to Doreski, but was clear that whatever poems emerged from the process were fine with him.

In contrast to the sustained period and long photographic practice that Kingston’s photos represent, Doreski’s poems were written over a few months, explicitly composed to accompany the images. The text, however, does not aim to describe the pictures. The words and the images are equal partners, brought together here in dialogue. ”We hope the reader will not only look at the photograph and read the poem,” says Doreski, ”but, in some sense, read the photograph and look at the poem: activating photograph and poem together in one burst of perception.”

Train to Providence features 36 pairs of poems and photographs. It will be available to order in paperback from all major book retailers. An eBook version will be available on Amazon Kindle, Apple iBooks, and Google Play.

William Doreski is a poet whose work has appeared in dozens of journals and several previous collections. He taught writing and literature at Emerson College, Goddard College, and for many years at Keene State College.

Rodger Kingston is a photographer working in a documentary tradition somewhere between the photographs of Walker Evans and the paintings of Edward Hopper, with a nod to William Carlos Williams and Bruce Springsteen.

bd-studios.com is the art and publishing studio by luke kurtis. Train to Providence is the newest publication in our ongoing line of poetry books, all of which feature combinations of text and visuals. Earlier titles include exam(i)nation by luke kurtis and Route 4, Box 358 by Dudgrick Bevins, among others. Our line of artists’ books includes The Animal Book by Michael Harren, Here Nor There by Sam Rosenthal, and Just One More by Jonathan David Smyth.

”His are the poems of our complex, frequently uncomfortable humanity.” —Michael McIrvin, American Book Review

”As for the photographs, they are very beautiful and very much in a spirit of Hopper… I can’t stop looking at them.” —Charles Simic, US Poet Laureate, 2007

”Rodger Kingston brings his own unique vision to searching out icons of Americana, and his compositions display stunning qualities of light and color that Hopper himself would have admired.” —Bonnie Tocher Clause, Author, Edward Hopper in Vermont