ONE LGBTQ+ POET’S JOURNEY TO FIND HIMSELF 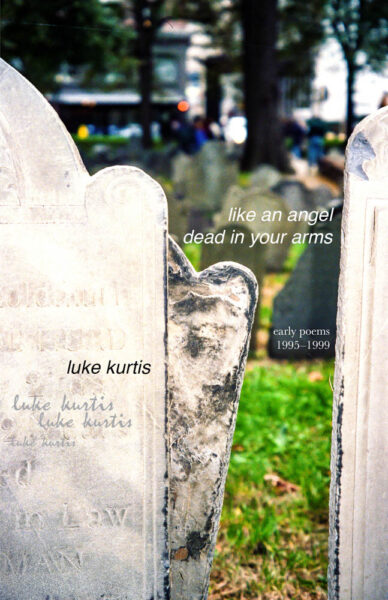 bd-studios.com is excited to announce like an angel dead in your arms: early poems 1995—1999 by luke kurtis. The book is an expanded reissue of the long out-of-print debut poetry collection by the author. It is available to order now from bd-studios.com and all other book stores.

Initially published in 2000 just before the author’s twenty-first birthday, like an angel dead in your arms reflected a young writer still developing his voice. The semi-autobiographical poems describe a time of great transformation for the poet as he carved out a life in New York City after growing up in rural Georgia, where he was outcast by his family for being gay. Most of the works were written while still living on his family’s farm, others after he moved to Greenwich Village. This collection straddles those worlds and the poet’s transition between them as well as much of the United States, with other poems written during his travels across the country from Boston and Chicago to Los Angeles and San Francisco. Despite such geographic diversity, the focus is pointedly inward as kurtis grappled with those tumultuous years of his life and his struggles with family, sexuality, and religion.

”I’ve been planning this reissue for several years,” says the artist. ”For a long time, I was embarrassed by these poems and was glad the book was no longer available. But I came to realize, however immature some of the poems may be, they do represent aspects of my life as a young person coming of age in a time and place that did not accept me for who I was. For that reason, these poems are important.” Still, kurtis says he tries to remember not to take himself too seriously and jokes about the collection. ”If nothing else,” he laughed, ”it shows my writing has gotten a lot better over the years!”

This new edition includes all of the original poems, some lightly edited by the poet to improve a phrase here or remove a word there. ”I don’t like to be too precious about my work,” he says. ”I know the value of editing. A text can always be improved. So, having written the book over twenty years ago and knowing what I know now, I couldn’t resist refining some of them.”

A selection of other poems from the same period makes up the second half of the book. Many of these works, having never been published before, were recomposed by the poet while in quarantine in 2020 to better capture his original intent. They, therefore, reflect the more mature and minimal style of his recent works. The text, nonetheless, remains thoroughly grounded in the era it represents.

Photographs have also been added. ”There were several photos I wanted to be part of the original collection,” kurtis recalls. ”But they couldn’t be because of printing limitations. I’ve now been able to add them along with some others.” All of them were made by the poet around the same time as the poems were written.

This twentieth anniversary expanded edition of like an angel dead in your arms is a look back at the roots of kurtis’s unique and diverse body of work. It follows the immeasurable fold: selected poems 2000-2015 book (published in 2018) and the obscure mechanics album (reissued in 2018) and is the latest project in the artist’s ongoing effort to gather all of his published writing and music. It is available to order now from bd-studios.com and all other bookstores. An eBook edition is also available.

luke kurtis is an interdisciplinary writer and artist. His other books include Angkor Wat: poetry and photography, an homage to Cambodia and its ancient temples, and exam(i)nation, about what it’s like to live as an LGBTQ+ person in Trump’s America.

bd-studios.com is the art and publishing studio by luke kurtis. like an angel dead in your arms: early poems 1995 1999 is the newest publication in an ongoing line of poetry books. Earlier titles are (This Is Not A) Mixtape for the End of the World by Daniel M. Shapiro, Train to Providence by William Doreski and Rodger Kingston, and Route 4, Box 358 by Dudgrick Bevins. Our line of artists’ books includes Architecture and Mortality by Donald Tarantino, The Male Nude by Michael Tice, and Just One More by Jonathan David Smyth.