EXPLORES IDENTITY AND DISPLACEMENT THROUGH SELF-PORTRAITURE 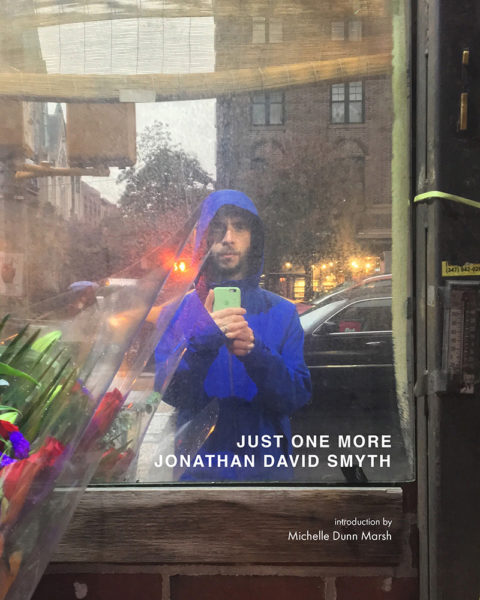 bd-studios.com is proud to announce Just One More, the debut photography monograph by Jonathan David Smyth. Since moving to New York City from the U.K. in 2012, Smyth has been photographing reflections of himself. Shot completely with his camera phone, this ongoing series of self-portraits combines issues of identity, displacement, belonging, and impermanence.

”I make photographs to prove I am here. My work is cathartic, but I want other people to relate to what I am presenting,” says Smyth. ”Just One More is a work of moments; it is a visual diary of my life in New York City, and these photographs are the mappings of where I have been. The pictures already exist; I am just stepping into them.”

Just One More will be available to order from Amazon from 18 October 2017. To celebrate the release, there will be a book launch from 6:00—8:00 PM on 2 November 2017 at Jefferson Market Library in New York City. Limited edition photographic prints from the book, signed and dated by the artist, will be available for purchase via the artist’s website: http://www.jonathandavidsmyth.com.

Jonathan David Smyth is an artist who works with photography, video, performance, and incorporated text. He was born in Belfast in 1987. In 2010, he earned a BA with Honors in photography and film from Edinburgh Napier University. He attended Parsons School of Design where he attained an MFA in photography in 2014. Smyth has exhibited in galleries and venues in the United States and abroad. He lives in New York City.

Michelle Dunn Marsh is an advocate for significant photography and the printed page. She held positions with Aperture Foundation and Chronicle Books before co-founding Minor Matters Books with Steve McIntyre. Dunn Marsh joined Photographic Center Northwest as executive director in August 2013. She has lectured at Parsons/The New School, Yale University, and University of Washington, among others, and is the chair of the photography panel for YoungArts in Miami.

Dana Stirling is a still life and fine art photographer, and the Co-Founder & Editor In-Chief of Float Photo Magazine. She was born in Jerusalem, Israel, and is based in Queens, NY. Stirling’s work has been featured internationally and exhibited in various festivals.

bd-studios.com is the art and publishing studio by luke kurtis. Just One More by Jonathan David Smyth is the latest in an ongoing line of artist books, following Retrospective by Michael Tice and Tentative Armor by Michael Harren.