DALTON AND NYC COME TOGETHER IN NEW POETRY AND PHOTOGRAPHY BOOK

TWO GEORGIAN POETS EMBRACE THEIR PAST THROUGH THEIR ART 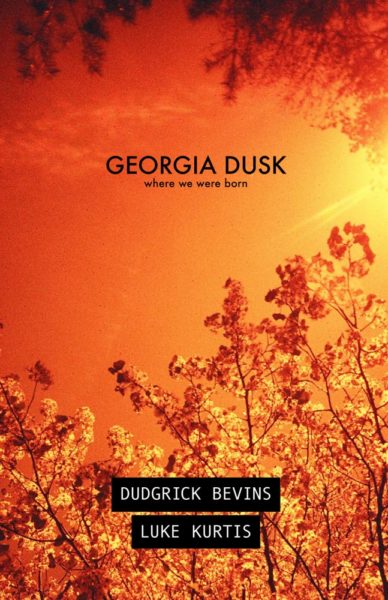 bd-studios.com is pleased to announce Georgia Dusk: Where We Were Born, a new poetry and photography chapbook collaboration by Dudgrick Bevins and luke kurtis. The poems in Georgia Dusk explore each poet’s—both of them Georgia natives—transition from quiet Appalachia to bustling New York City. It is the first collaboration between the two poets.

While both poets are from north Georgia, Bevins and kurtis did not know each other until they met in New York City. “We discovered we had a lot of things in common, not the least of which is both being born in Dalton,” says kurtis. The two had casually talked about collaborating in some way if they could come up with a project that made sense. ”One time when I was back in Dalton, I texted Dudgrick to say, ‘I’m where we both were born,'” remembers kurtis. Thus the genesis of Georgia Dusk when Bevins replied, “That should be the name of our book!”

kurtis kicked things off by writing “the last happy days,” a poem based on a series of photos he made as a teenager growing up in Villanow, a rural area outside of Dalton. “They are some of the earliest photos I ever took,” says kurtis. He dug out the photos and used them as prompts to write his poem. Dudgrick then did the same with prose-poem “(T)here and T/here,” pulling from the memory of old photos also made when he was younger and living in Georgia. In response, kurtis wrote “between here and there” and pulled in more recent photos from life in New York City. The resulting trio creates a balanced chapbook reflecting both poets past and present lives.

“This collaboration is full of symmetries, from the themes in our writing to the book design, and, of course, our common heritage as rural Georgian poets via New York City,” says Bevins. Indeed, kurtis’s more minimal style bookends the denser conversational prose-poem style of Bevins, creating symmetry and balance amid the pull of the sometimes difficult emotions expressed by both poets.

Georgia Dusk is available to order in paperback from Amazon. An eBook version is available on Amazon Kindle, Apple iBooks, and Google Play.

Dudgrick Bevins is a queer-identified writer and photographer transplanted from the North Georgia mountains to New York City. When he isn’t teaching literature and creative writing he enjoys the company of his partner and their very grumpy hedgehog, Ezri.

luke kurtis is a Georgia-born interdisciplinary artist. His books include INTERSECTION, The Language of History, and Angkor Wat, all part of an ongoing series that combines photography, writing, and design. He lives and works in New York City’s Greenwich Village.

bd-studios.com is the art and publishing studio by luke kurtis. Georgia Dusk is the newest poetry publication, following Angkor Wat by luke kurtis from earlier this year. A debut solo collection from Dudgrick Bevins is forthcoming. Other releases from bd include an ongoing line of artists’ books such as the recently published Just One More by Jonathan David Smyth, as well as Retrospective by Michael Tice and Tentative Armor by Michael Harren.