THE DARK SIDE OF THE DECADE OF EXCESS

bd-studios.com is proud to announce two new books linked by the 1980s. Architecture and Mortality by Donald Tarantino is an artists’ book documenting work by the late printmaker. (This Is Not A) Mixtape for the End of the World by Daniel M. Shapiro is a collection of prose poems inspired by the heyday of MTV pop music videos. The two books are the latest entries in the bd lineups of Artists’ Books and Poetry Books. Both collections will be published in August and available from all bookstores.

Donald Tarantino’s Architecture and Mortality collects prints, drawings, and other work by the artist. After studying at Philadelphia College of Art, he settled in New York City, where he became part of the 1980s East Village scene. Working mostly as a printmaker, Tarantino refined his practice at the fabled Lower East Side Printshop. His art explores the intersection between cities and suburbia, shifting between office buildings and domestic spaces. His images examine the structures we inhabit, interweaving the anxieties they cause, and the joys they elicit. ”He was fascinated both with suburban life and the domestic space as well as city life and skyscrapers,” says Michael Tice, his partner.

Tarantino’s late prints were inspired by the isolated rooms and hallways of the St. Vincent’s AIDS ward, driving home a sense of mortality that loomed all too close. He died in 1988 amid the height of the crisis. Michael Tice has overseen an archive of the artist’s work ever since, and his collaboration was instrumental in creating the book, which is a document of an independent gay artist of the 1980s and a memorial to all those lost in the crisis. 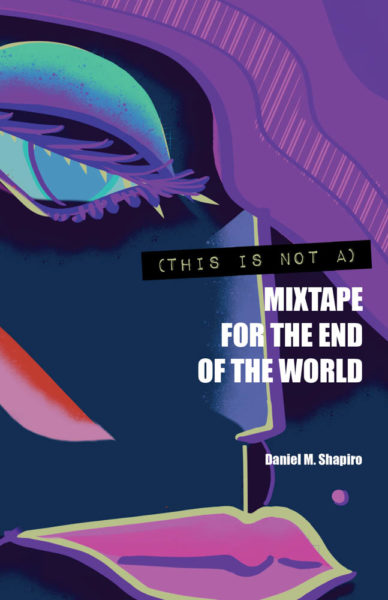 Daniel M. Shapiro’s (This Is Not A) Mixtape for the End of the World is a poetic counterpoint to Tarantino’s visual art. As an active member of the Pittsburgh poetry scene, he has published and performed for many years, often incorporating elements of pop culture into his work. He began writing his 1980s music-inspired poems to create ekphrastic art that explored aging and childhood. The collection also considers many of the fears associated with the era, including nuclear war and AIDS, the disease that ended Tarantino’s life so early. But as Shapiro continued the project, he noticed how his 21st-century notions of gender, race, and politics were imbued within the sense of youth and nostalgia, which, ultimately, grounds the work in the present.

Shapiro’s nostalgic yet dystopian interpretation of many iconic music videos will seem familiar to those who came of age in the MTV era. ”I want people to think about what music of their childhood meant to them then vs. what it might mean now, and what their formative years meant then vs. now,” he says. ”Right now, our culture is changing because many people are responding to problems that have existed for so long, while some continue to deny that those problems exist or ever existed. When we revisit art from an earlier time and consider the environment in which it was created, we can often rethink current rights and wrongs.”

A series of artworks by Stephen Tornero accompanies Shapiro’s poems. Much like the period’s music, the bold excess, bright colors, and festive abstractions stand in contrast to the decade’s underbelly.

Though Donald Tarantino and Daniel M. Shapiro never knew each other, their work exists together comfortably. While our memory of the 1980s is often fueled by romantic nostalgia, Tarantino’s and Shapiro’s books remind us of the darker side. For every Keith Haring, there are countless Donald Tarantinos. And for every glossy music video, there is a Shapiro poem.

Donald Tarantino was an artist and printmaker active in New York City’s East Village art scene of the 1980s. He died of AIDS-related illness in 1988. Architecture and Mortality is the only published overview of his work.

Daniel M. Shapiro is the author of several poetry books and chapbooks, including How the Potato Chip Was Invented (sunnyoutside, 2013), Heavy Metal Fairy Tales (Throwback Books, 2016), and The Orange Menace (Locofo Chaps, 2017). He is a special education teacher who lives in Pittsburgh. (This Is Not A) Mixtape for the End of the World is his first collaboration with bd-studios.com

bd-studios.com is the art and publishing studio by luke kurtis. (This Is Not A) Mixtape for the End of the World is the newest publication in an ongoing line of poetry books, all of which feature combinations of text and visuals. Earlier titles are Train to Providence by William Doreski and Rodger Kingston and Route 4, Box 358 by Dudgrick Bevins, among others. Our line of artists’ books includes The Animal Book by Michael Harren, The Male Nude by Michael Tice, and Just One More by Jonathan David Smyth.

”Like the light that reaches earth from a dying star, whether celebrity or celestial body, Daniel M. Shapiro’s poems from (This Is Not A) Mixtape for the End of the World radiate a brilliancy that lingers long after you’ve put this collection down.”