ART AND ADVOCACY COME TOGETHER IN NEW ALBUM AND BOOK

MICHAEL HARREN WANTS YOU TO THINK DIFFERENTLY ABOUT ANIMALS 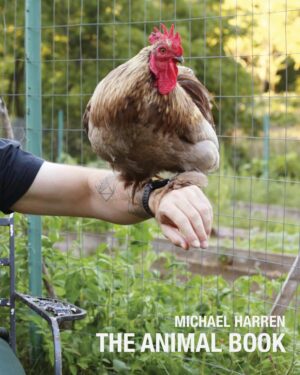 Brooklyn based electro-acoustic composer and performance artist Michael Harren has released The Animal Album and The Animal Book. The album and book, based upon Harren’s successful multimedia solo show, The Animal Show, blends humor with candor to convey the importance of keeping all animals safe from harm. Both releases are available now.

The Animal Show premiered in New York City in 2016 and continues to be performed in venues throughout the United States. Through stories, music, and video from his artist residency at Tamerlaine Farm Animal Sanctuary, The Animal Show takes the audience on a ride that will inspires people to think differently about their relationships with all kinds of animals.

“Michael Harren is using the magical power of the arts to advocate for animals,” says VegNews Senior Editor Jasmin Singer. “He proves that allowing others to witness your story is an effective—and staggeringly beautiful—way to effectively inspire change.”

The book presents the full text of the show along with photos, video stills, and other behind-the-scenes material. Paired with the album, it is a fully immersive experience. The book was designed by luke kurtis, who previously collaborated with Harren on Tentative Armor. Both books are published by bd-studios.com.

About Michael Harren
Brooklyn-based composer and performer Michael Harren combines elements of classical composition with experimental electronics and storytelling to create hypnotic and boldly intimate work that walks the line between Laurie Anderson, Peter Gabriel and Dead Can Dance.

About bd-studios.com
bd-studios.com is the art and publishing studio by luke kurtis. The Animal Book by Michael Harren is the latest in an ongoing line of artist books which includes Just One More by Jonathan David Smyth and Retrospective by Michael Tice. Here Nor There by Sam Rosenthal will follow later this year.